It’s my birthday tomorrow (probably today by the time I’ve finished typing this!) and this, as well as a bunch of other very complicated factors, has triggered (or, more accurately, heightened) a significant mental health crisis for me for complex and somewhat twisted ways. I’ve been fortunate in that some more intensive support was put in place yesterday, covering the weekend, to be reviewed on Monday. In light of this, my care coordinators kindly decided to visit today to assess me and provide a bit of a release of the pressure that’s been building… or that was the idea, then it all went wrong…

What was supposed to be a supportive visit to help me survive (literally) this especially hard period, took an unexpected turn when all of a sudden it became about all of the things I ‘should’ be doing…go out for a big celebration, see lots of friends and family, phone friends and family, spend a lot of time out of the house, go out with my mum each day over half term…the list of what they wanted me to do over the next days and week seemed to go on and on…and on and on… This might not sound like much, but I have been housebound other than health appointments for months, only managing to go out for a brief coffee with friends a couple of times over that period, and not leaving the house much more than that for over 2 years. Behavioural approaches haven’t worked – they just wear me down to the ground as I push on, fighting the demons in my head that just won’t abate, making these ‘nice’ things neither nice nor even a distraction from my thoughts and feelings. Everyone agrees that the complexity and longevity of my illness – that my troubles extend back to the beginning and have been particularly significant for over half of my life – mean that I’ve never experienced these things as the healthy population tend to, but I battled on alone for a decade doing them stubbornly regardless, which has landed me in the drained and devastated state I’m in now…all professionals involved (including my care coordinators) agree that the only way I am going to be able to change and fight this, to survive, is by tackling what’s going on in my head and that what will allow me to start to make the significant changes in the rest of my life that mean that I can truly live rather than survive. There’s no behavioural shortcut because that’s what I bullheadedly did alone and to the extreme for so very many years. I just can’t do that any more; and doing so increases my risk of suicide directly because I wear myself down so much that I can’t fight the demons in my head at all any more. This is why I’m waiting to move to an up to 3 year placement where I can work on this all in a psychologically-informed way, with staff to work with and support me 24/7.

So I was surprised and terrified that today all of a sudden there were these enormous expectations that I knew I couldn’t safely or healthily meet, but that I would push through because I’m terrified of angering the professionals who are doing their best to help me. All of these ‘shoulds’ came with a strong implication that I wasn’t doing enough, wasn’t trying hard enough, that I could be well or significantly better pretty easily. The pressure, instead of being relieved, was increased massively and unbearably at a time when I was supposed to be receiving crisis support to relieve already existing pressure that could kill me. And none of it made sense with my care plan, multi-disciplinary professional opinion, or what I knew of these two professionals. I was left devastated to my core. Which sounds dramatic, but when already in a state of intense crisis, something seemingly innocuous such as this can be the end of the world, or that final thing that confirms that you are the pathetic, useless, weak shell of a person that fuelled the despairing desperation to end your life for everyone’s benefit.
This hour lecture was incredibly intense. I knew these professionals were saying these things because they cared and because they were trying to help me. I trust these people. But the message that my poorly brain got was that the core people in my care thought I was lazy and could quite easily master going from housebound to partying and daytripping overnight, a day after my keyworker within the crisis team seriously thought I might end my life and while that struggle continued. And because I trust them and I knew it was coming from a caring place, I thought everything I’d been told by professionals until that point was being thrown out the window and my choice was either to suddenly function very highly or end my life in despair, shame and disgrace because I wasn’t good enough to survive. Even if they weren’t ‘right’ in what they were saying to me, which deep down I did somehow manage to grasp on to, these people are the ones driving my care so if they went down this route it would mean this approach or nothing.

Thankfully, I managed to get hold of one of them over the phone after the visit and managed to explain this to her before dissolving into pathetic tears (probably only the 3rd time she’s heard me cry in 6 months on my case, including times when she’s had to call ambulances for me, a visit in intensive care etc.). Thankfully, she is a reasonable person and after listening she agreed with me completely – said we know better than taking this approach with me, should wipe out today’s visit completely, mark it out as something never to be repeated, look more at the specific interventions that help me and go back to the psychological focus we had been using. So what happened in that visit just an hour earlier? She told me that these mistakes had been made because they felt so sad seeing me the way I was today, knowing how close to the edge I was and particularly had been yesterday, and – both being just a few years older than me – struggled to see me be so badly affected by my illness; they were sad that I approached my 24th birthday with scarily intense mental illness that I didn’t really know any different from and high risk suicidality, they were sad that I saw my life as something that needed to be wiped from existence, they were sad that I couldn’t live how a 24 year old should be able to live, they were sad that I couldn’t spend my birthday or any day in the way that I or everyone else want…and that sadness drove them to try to force things that logically and professionally they knew wouldn’t and couldn’t work, that shouldn’t be done, but they just wanted something nice for me, because they care and because they were sad for me. Unfortunately, as so often happens, emotions had then led to something that even they – once just slightly removed from the situation – could see had been damaging.

Now, this isn’t a criticism – not in the slightest. I’m lucky to have professionals who care about me and who want to help me; incredibly lucky. This is also clouded by a lot of ‘mental filters’ caused by my illness that mean I read the worst in to everything, reflect the self-hatred I feel on to others, fail to grasp on to positives, and spiral into panic over something that other people would be able to brush aside. The care co I managed to talk to kept saying ‘in my defence’ as she explained what had happened to me – she didn’t need a defence: it was understandable, and it’s what is bound to happen in a system populated by humans. What’s important is that she was big enough to listen to the effect it had had on me, acknowledge that they had unintentionally made things worse rather than better, realise that what had happened wasn’t right, be willing to explore the motivations and mistakes, and make changes based on these reflections.

I think that the impact of whatever goes on on the professional side of therapeutic relationships is sadly frequently overlooked in the mental health system, and this can have a dramatic impact on the care that someone receives in so many ways, perhaps most camoflagued or confused when that comes from a place of real care and misplaced frustration from professionals not being able to make the person they’re caring for ‘better’…and, just in the way that situations and triggers can make it harder for someone who is unwell to cope, these same things can bring up feelings and hurdles for the professionals. This is where openness, honesty, the ability to constructively reflect and a system that supports staff with appropriate supervision etc. is especially important.

Anyway, that’s the end of my rambling thoughts. My brain is too tired to edit, which probably means I’ve also not made much sense, so I apologise for that! But it’s now an hour into my 24th birthday, and a ‘should’ that wasn’t mentioned is probably that I should not be writing a mental health blog to raise awareness at the time of my birth… 😉

Documenting life with personality disorders, depression & anxiety. Aims to reduce the stigma, misunderstanding & loneliness of mental illness by providing honest and relatable accounts of everyday life and struggles - as well as sharing the positives and achievements that are often downplayed by the general public. Topics discussed can be triggering, so please look after yourselves. View all posts by thedoodlechroniclesblog 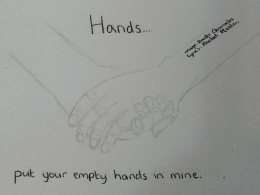